I am still a bug artist, but I am no longer Lisa Ward Landsman obviously.

I haven’t gone by the old name in about five years, but I recently discovered, while perusing my website stats, that people are still searching for me using these terms. ALOT!

In the past few days people have searched:

lisa ward landsman bug artist
lisa ward landsman biography
lisa landsman the bug lady
lisa landsman insects
lisa landsman married name  – Lisa Karen Ward is my married AND maiden name. I
chose not to give up my identity this time around…and then there’s the starting all over with my career and a new name, which is not good for an artist, as evidenced by all of these internet searches for Lisa Landsman! Oh, and my oldest daughter’s last name is Landsman. How awful would it be if the whole family had a different last name than she did. I would feel like a terrible Mommy! So we have three last names in our household. It drives people crazy because it is not the “norm”, but I have never claimed to be normal : )

So who are you people, and why are you looking for me??

It is most curious! I guess I am just a lot more famous than I thought. Wink 🙂 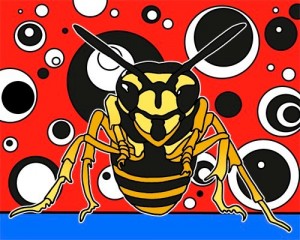 I recently found out that the NBC television show, Parenthood, was signed on for another 22 episodes, yay!

For those of you who don’t know, my artwork was chosen to decorate Max’s room because his character loves bugs, just like me! Three of my insect pieces are on the set, but I have only been lucky enough to catch a glimpse of one of them. Now I have 22 more chances to see the other two.

During the season, and I will remind you, the first reader to let me know they saw one of my bugs gets a free print…so watch the show! It’s actually a good show too! 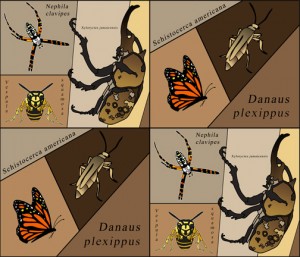 I recently entered a design contest, which would have gotten me a nice two year licensing contract with a large fabric design company, but alas, I did not win. The theme was “Geek Chic”, and being the bug geek that I am, I of course created a design featuring my favorite bugs and their taxonomic names. I called it “Entomology Geek”…a little too geeky for the masses, I suspect! I concur that I would probably be the only person who would buy this fabric. What do you think?

Happy early Friday, everyone, and have a fantastic weekend!