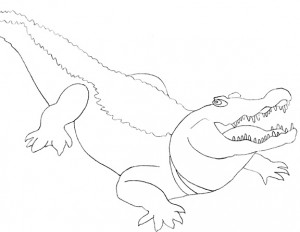 a sketch, the beginning stage of an american alligator illustration

Alligators are everywhere in Florida, along with those little invasive brown anoles that even most native Floridians don’t even realize are invaders. It’s the bright green ones that you don’t see many of that are native. There aren’t many of them because the brown ones have taken all of their resources. Both of these creatures freak the tourists out, but we think they are an everyday no big deal. I have always loved lizards of all sorts, and I am ashamed to say that I have had lots of pet lizards, including bearded dragons (lovable little lizards they are, the only pet lizard I would recommend to anyone…mine were named Bilbo and Frodo, and that was way back in the 90’s BEFORE the movies came out!), Chinese green water dragons, a variety of native Florida lizards, and a couple of really big green iguanas named Iggy (the stereotypical name everyone calls their iguana! I didn’t name him 🙂 ) and Edwina (who started off as Ed with her former owner, who thought she was a male).

I had a request WAY back when to do an alligator illustration. It has been on my to do list for months, and I apologize to the person who requested it. She wanted to commission it, but I wouldn’t let her since it was something I had planned to do in the future anyway. I saved her some money, but she has been waiting a very long time. Sorry, Cynthia!

The picture above is the beginning stage of my american alligator illustration, a pencil sketch.

Life has been crazy around here! Summer is almost here, and the kids’ activities will finally calm down. I can’t wait. 🙂

One thought on “American Alligator”