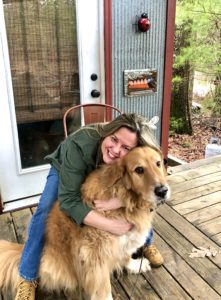 Lisa & Hank in front of her tiny house called the Bumbleshack

“My work is inspired by my love of animals, nature, conservation, the Pop Art movement, mid-century modern design, bold color and a desire to create an appreciation for the most unloved of earth’s beneficial creatures. My paintings are physically accurate but fantastical, crisp and modern, with bright abstracted backgrounds. I want to make people say, ‘What a beautiful creature!’ and gain an interest, and hopefully, an appreciation for a critter they have never considered.”

Lisa Karen Ward was born in Ft. Lauderdale, Florida. A couple of years later, her father took a job that moved the family to Matthews, North Carolina, just outside the financial town of Charlotte. They stayed there for the greater part of a decade, and a significant portion of Lisa’s childhood was spent running around in the woods behind their house and playing in nature. Her family did a lot of camping, hiking and other outdoor activities, which further nurtured her love of wildlife and their habitats. Finally, the family returned to Lisa’s mother’s Tampa home. Her family originally arrived there in the 1800s from Spain by way of Cuba and opened a cigar factory and a grocery store in Ybor City, the historic Latin quarter of Tampa.

Lisa showed an interest in the visual arts at a very young age, and her parents encouraged this by enrolling her in various coursework in art technique throughout her life. An equally important love in Lisa’s young life was zoology. She would sit for hours in the yard observing insects. She attended Florida State University, and later transferred to Florida Atlantic University for a degree in biology. Since then, she has worked as a wildlife biologist, animal registrar, recorded chimpanzee behavior as part of a project set up by The Jane Goodall Institute, and worked with sawgrass on an Everglades restoration project. During the same time period, she painted masterpiece reproductions, by such popular artists as Miro, Picasso and Matisse, for an art reproduction company.

Lisa’s work appears in private collections internationally. She is published in Coastal Living magazine, and her artwork was chosen to decorate their Apollo Beach, Florida, Idea House. She served on the board of Gala Corina, a non-profit arts organization in Tampa, Florida, and produced an annual art show with a roster of more than 100 artists and 5,000 patrons on opening night. She was a top 3 finalist in the category of Best Local Visual Artist for Creative Loafing magazine’s 2008 Best of the Bay awards. One of her pieces was chosen by the Westshore Alliance Public Art Committee in Tampa, Florida for their 2007 banner program and was on display in the Westshore district of Tampa during the Spring of 2007. Her artwork was also featured in a video commissioned by the Tampa Chamber of Commerce to promote the city nationally called Creative City. She earned the nickname “the bug lady” because she created an entire art exhibit, including a functioning 6 foot tall can of Raid, on the conservation of beneficial insects.

Lisa “retired” from the Department of Biological Operations at The Florida Aquarium as the Animal Registrar back in 2012 to stay home with her youngest daughter and be a full time artist. While working there, she was chosen and fully sponsored by AZA, the Association of Zoos and Aquariums, to attend a workshop in Rotterdam as one of 40 subject matter experts from all over the world. Their purpose was to build a global database that promotes sharing of standardized and scientifically collected animal data.

Most recently, three of Lisa’s pieces from her bug series were featured on Seasons 3 and 4 of the NBC television show, Parenthood.

She donates a percentage of her sales to various animal shelters, rescue and wildlife organizations.

Lisa has two daughters, Adelaide and Hazy, who are ten years apart in age, a huge Golden Retriever/Bernese mountain dog named Hank the Tank, a black cat named Coby and two kitty twins named Aslan and Caspian. Lisa and her girls live in two tiny houses in the mountains of Western North Carolina. You can follow their journey while building their homestead from scratch through their blog at The Bumbleshack. Lisa’s favorite activities, besides making art, are spending time out in nature with her family, “creekin'”, hiking, kayaking, observing animals in the wild, learning how to be a homesteader and organic gardener, and learning new and better ways to live without harming the earth.

Read more about the artist in a feature article written by Jenny Carey in Flair magazine and in the St. Petersburg Times article, Front Porch: Making Art to Fit the Furniture, by Elizabeth Bettendorf. See her artwork in the pages of Coastal Living magazine’s Apollo Beach Idea House issue.

For more media coverage and to read the articles listed above, please visit Lisa’s Media page.